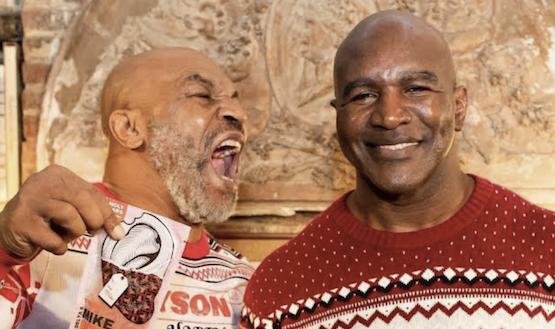 Mike Tyson and Evander Holyfield had been bitter rivals for years, but one night, they found themselves in a strange and unexpected situation.

They were out late, wandering the streets, when they stumbled upon an old, abandoned building. Thinking that it would provide a good place to rest and catch their breath, they entered without thinking.

But as soon as they stepped inside, they realized that they had made a terrible mistake. The building was not abandoned, but was instead home to a group of vampires.

At first, the vampires were confused by the sudden appearance of the two boxers. But as soon as they realized who they were, they became excited and began to circle around them, baring their teeth and growling hungrily.

Mike and Evander tried to fight back, but they were no match for the vampires. They were quickly overpowered and taken prisoner.

But just as the vampires were about to strike, they were interrupted by a group of vampire hunters who burst into the building. In the ensuing chaos, Mike and Evander were able to escape and make their way to safety.

They never spoke of their encounter with the vampires again, and they continued to feud as they had before. But they were forever changed by the experience, and they knew that they had come close to death that night. - satire - written by dmv life team